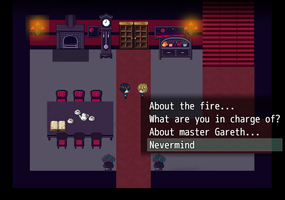 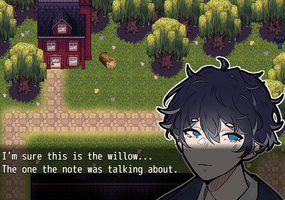 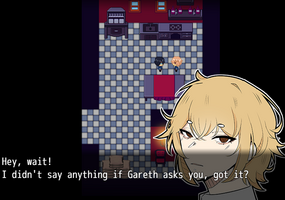 Hi everybody! This is a huge update, I hope you will like the novelty!

I think I'll reserve the bonus endings for the next big update, for the moment I wasn't convinced of that and... I didn't want to present something half-hassed or incomplete. But I kept my word for all the rest, so here are the new additions to the game!

- The most obvious feature: the graphics have been redone from square zero. I know that even this time it's not that horror-ish, but I wanted you to feel in almost a normal home. The ambience has quite changed though and now blood is a tad more convincing I hope! All the maps are parallax maps now, so if you encounter some issues let me know... it's the first time I'm doing this.

- The infamous chase scene has been rewritten! It functions a little bit differently: now the chaser doesn't spawn immediatly after you and he's a bit slower. Also that tiny corridor now is a big room and it gives you more space to run. The only downside is that, slowing down the chaser, he's underperforming. I know that the chaser might result quite dumb sometimes, but in the end I prefer seeing him hitting on the walls rather than forcing you through a frustrating experience.

- The tearoom has another function: if you feel like looking through the walkthrough is cheating you can ask for hints while having tea. Zakhari, Sasha and Hilda will give you different hints depending on the days, so it will be like having three hints per day. I repurpoused some FAQ questions into that. I didn't put Gareth in charge because you're not supposed to tell your master you're getting nosy with his stuff.

Also there are the ITEMS: each character has one item and bringing it to them will unlock a scene in the tearoom.

- I made a bonus room at the end of the game. If you're curious to see it, you need 15 silver coins scattered through the house. There's almost one in each room. I wrote down the locations in the new walkthrough, don't worry!

- Bug fixes. I fixed all the reported ones thank to your help! x3

- We finally have a cool looking gramophone now

- The balcony now finally looks like a balconly lol

Thank you for following my updates and for showing interest in the game! And also a shoutout to Kanenogi who tested the game and died repeatedly in the collpasing house for us lol. Seriously: thank you, Kanenogi! ;w;

And, as usual, let me know if encounter some bugs. We tested the game but you never know...

Nobody talks about the fire incident at Estmour mansion. As the new servant, you're bound to keep silence... will you?

it's looking really good, ill give it a try very soon

Thank you Cicada >\\\< I'm looking forward to your feedback!